Things to Do in Munich – Best Tourist Spots 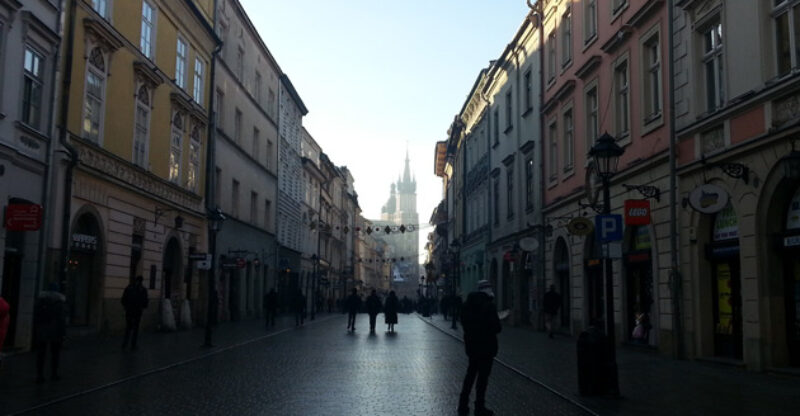 Krakow is the oldest city in Poland. It is also one of the country’s 3 largest cities with a population of 800,000. Krakow, a city with many traces of the past with its streets and historical past, is the second-largest city after the capital of Poland, Warsaw. It is known as the most tourist city in the country. So there are many beautiful places to visit in Krakow.

Beautiful Places to Visit in Krakow

It is one of the cities that did not fall apart much after the Second World War. The city of Krakow creates the impression of an open-air museum. It has managed to contain many historical spirits from the Middle Ages to the present.

The city has an intact history with its artistic people. Known as the heart of the country, the city of Krakow is a living testament to Poland’s unique history. You will love this city. Because there are many good things to do in Krakow.

Florianska Street is a busy street with its liveliness and activity at the end of the historic square in Krakow. It is also one of the places where socializing is the most, as it has businesses with many famous brands.

You can easily see that artistic paintings are sold on the walls. Considered the beginning of the royal road. It is a street starting from Florian’s Gate to Rynek Glowny.

Wawel Castle, which is the building block of the Polish country in both political and cultural terms, III. It started in the 13th century with the order of Kazimierz. It is a very important castle in terms of Poland’s history.

Since it is in the highest places of the city, you can watch the view of the city from a panoramic angle. It is a magnificent building inhabited by three dynasties. You can come across many caves, museums and exhibition areas inside. 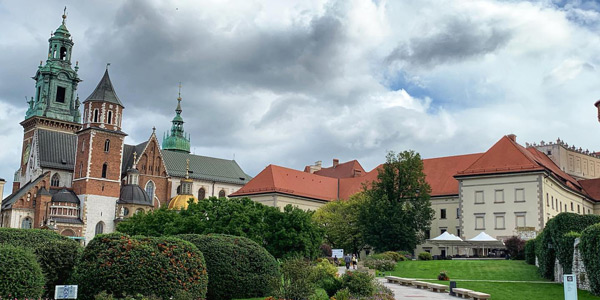 Wawel Castle – Best things to do in Krakow

Oskar Schindler, with his character we know more from movies today, owns the factory, which is the most striking place in the Krakow museum. The main protagonist of the movie “Schindler’s List” is this factory. Although Oskar worked for the Nazis, he still helped many Jews to survive.

The most striking aspect of the museum is that the famous list of a thousand Jewish names that Schindler wanted to save and made a list by planning to save it is also on display. 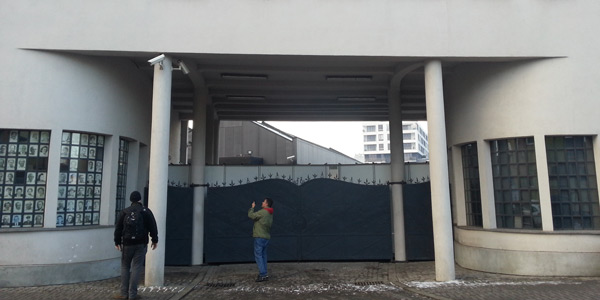 There are literally 2 towers in the church. Trumpets play every hour in these two towers. The anthem, which works with trumpets in the church, is interrupted. The reason for this is that during the Mongol invasions, someone who played the anthem was killed due to an arrow and the march was interrupted.

It has become a tradition that relives that moment. It has Gothic architecture. At the same time, St. Mary’s Basilica has the world’s largest gothic back-altar work. So this basilica is one of the beautiful places to visit in Krakow. 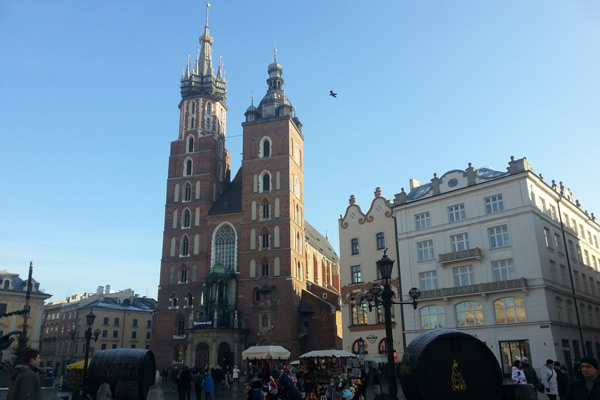 The city of Krakow was completely destroyed in the 13th century with many blows. Later on, the city recovered from these heavy attacks and restructured the city. In this ongoing process, 8 gates and 47 watchtowers were built in the city.

Today, it houses the museum called City Defense Walls. There are many shops after the entrance as a pedestrian street. The structure has been well preserved until today. So, this gate must be on the list of beautiful places to visit in Krakow. 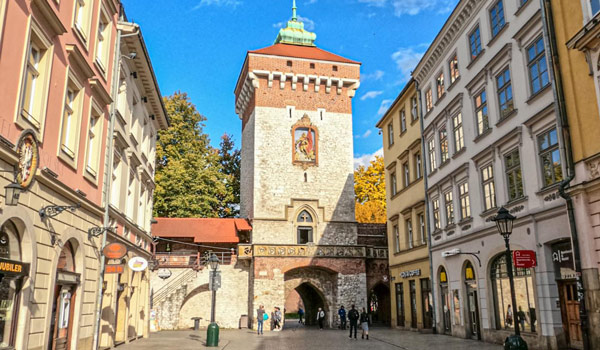 This museum, which was actually an ordinary salt mine in 1722, turned into a museum thanks to the miners. The museum is spread over an area of ​​300 kilometers, with 9 floors in total.

The salt mine has a depth of 327 meters. It is the oldest mine of its kind. Although there are no individual trips in this region, the rules of travel are very strict.

You can only visit this mine by coming with a group and a guide. It is possible to see wonderful sculptures carved from salt. There are a mine education and cultural center inside. It is a really amazing tourist spot. So you should definitely visit Wieliczka Salt Mine. It is around 20 minutes away from Krakow by train. 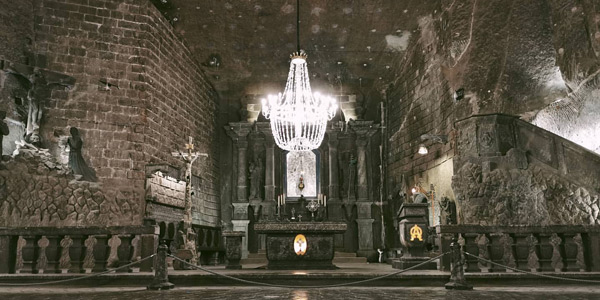 Wieliczka Salt Mine – Places to visit near Krakow in Poland

Krakow has taken many measures to prepare itself for a powerful defense in medieval times. It was built in 1498 to protect the Florian gate and prevent damage. The thickness of its wall is 3 meters.

It was designed in a Gothic style, just like the door, it protected, to make the military structure stronger. Inside, there are 130 spaces for the soldiers to use. The Krakow Barbican stands on a ditch and is connected to the Florian gate with a bridge in between. So, if you make a trip to Krakow, this spot must be in your itinerary for places to visit in the city. 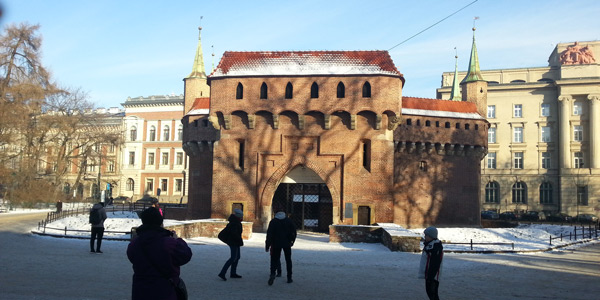 Krakow Barbican – The most beautiful places to visit in Oldtown

Saints Peter and Paul Church, built between 1597 and 1619, is the first building in the city to have a Baroque style architecture. When you look at the architecture, you can easily feel the Italian spirit.

There is the signature of Giovanni Maria Bernardoni on the dome and interior design of this religious building You can come across some depictions of two saints with the plaster and ornaments made in the interior. In front of the building, there are sculptures symbolizing the 12 apostles of Christ. So, this church is one of the historical places to visit in Krakow. 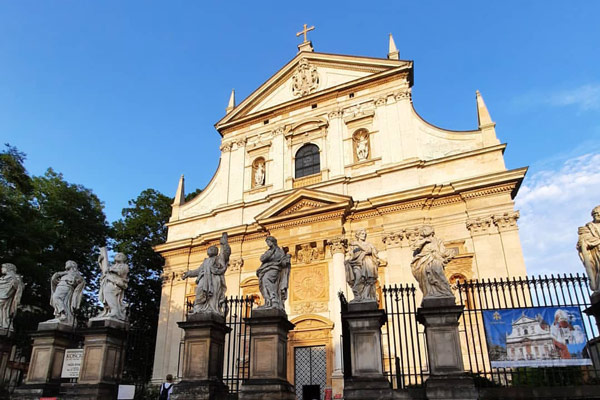 According to a rumor said about this place; It was said that a brutal dragon living in a cave on Wavel hill sometimes came and hunted the local people. A brave-hearted shoe seller who lived in those ages wanted to put an end to this persecution of the people. He poisoned the cruel dragon with sulfur. So the natives of Krakow are now spared from the cruelty of the ruthless dragon. It is a place with a structure and splendor that fascinates tourists.

Check my other article: Places to visit in Moscow.

Built-in the 14th century, this town hall has a tower with a height of 75 meters in total. Located in the main square of Krakow city, this building is the first town hall. This town hall, where you can see the effects of Gothic architecture in this building, has two remarkable areas. There is a prison on the ground floor of the tower.

Theater performances are now being performed in this prison, where prisoners were tortured in the Middle Ages. The other area is the top part, which consists of 110 stairs and has a magnificent city view. 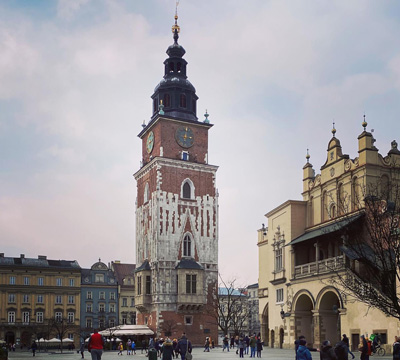 Kazimierz, one of the most popular and busy places in the city, has an atmosphere that attracts the attention of many people, especially in terms of entertainment and nightlife. Despite all this colorful life, very few people know that this region has been an independent city for five centuries.

Its stone walls feature huge candles lit bars. Moreover, there are many synagogues reflecting the history of the region. 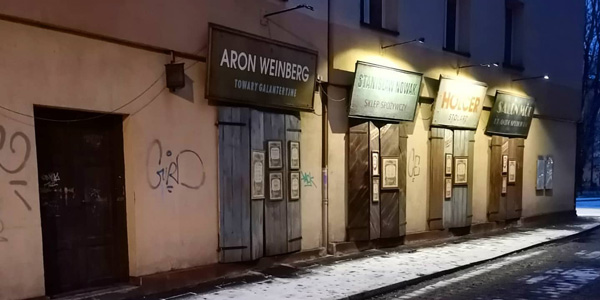 Kazimierz is one of the best places to visit in Krakow, and also things to do in Poland.

This area, outside of Krakow, is a concentration camp. Many innocents were massacred by the Nazis here. Visits here are made to commemorate the innocents who were killed in the second world war. It has an eerie effect that impresses visitors with its gloomy atmosphere.

Visits here reveal the greatest crime against humanity ever made. Over the course of the war, 1.1 million children and adults were killed by the Nazis. Trips with a tour guide can give more detailed information about the history and past of this place. 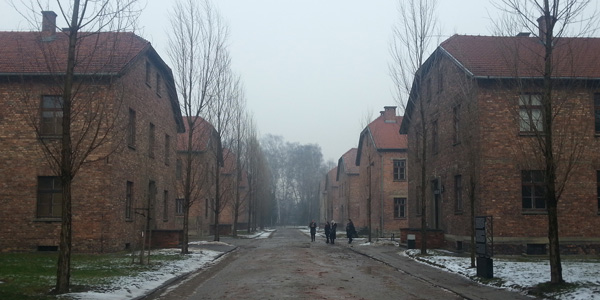 The Wawel Cathedral has witnessed many coronations and funerals of Poland’s rulers and nobles for 900 years throughout history. This cathedral was first built in the 11th century. This cathedral, which is a product of Gothic architecture, has come to its present state with its construction in 1364. It conveys the history in the most effective way thanks to the revolutionary chapels inside.

You can have the opportunity to go to the top floor of the bell tower and watch the magnificent view. Visiting the museum inside seems to be a historical journey. 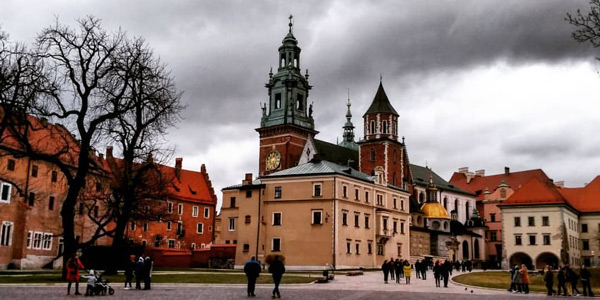 Wawel Cathedral – One of the Tourist Attractions in Poland, and also places to visit in Krakow.

The magnificent and gothic architecture of Krakow Cloth Hall, which dates back to the 13th century, is a striking structure that makes the main square even more magnificent. After the building was renovated between 1875-1879, the construction of commercial activities was abandoned and magnificent celebrations and balls started to be held there.

If you are planning to go to other Europe countries, you can read this article as well: Places to Visit in Paris.

Many works of art are on display. Exhibited works; It is exhibited in halls divided into four sections called Siemiradzki, Bacciarelli, Michalowski, and Chelmonski. Of course, visiting this historical building with a tour will give more detailed information about its history. In addition, there are exhibitions in various archaeological and ethnographic areas inside the building. 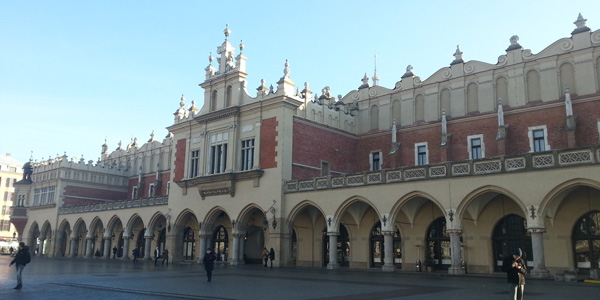 It is possible to see the best examples of glasswork, which dates back to ancient times, in the Stained Glass Workshop and Museum, founded in 1902 by Stanislaw Gabriel Zelenski. The museum moved to its current building in 1904. It also acts as a kind of workshop. There are works that are always in constant innovation here.

Where to Stay in Krakow?

There are many options for accommodation in Krakow. You choose one of the cheap hostels, mid-range hotels, luxury places, or Airbnb in the city. The important point is you should book a place where is near the old town. Here is the hotel list on the booking website. I recommended you some accommodation below. 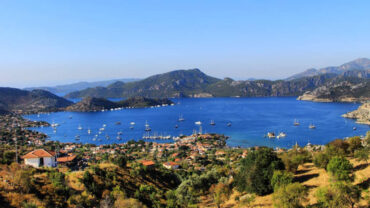