Best Things To Do In Budapest & Beautiful Tourist Attractions

Things to Do in Marmaris & Tourist Spots 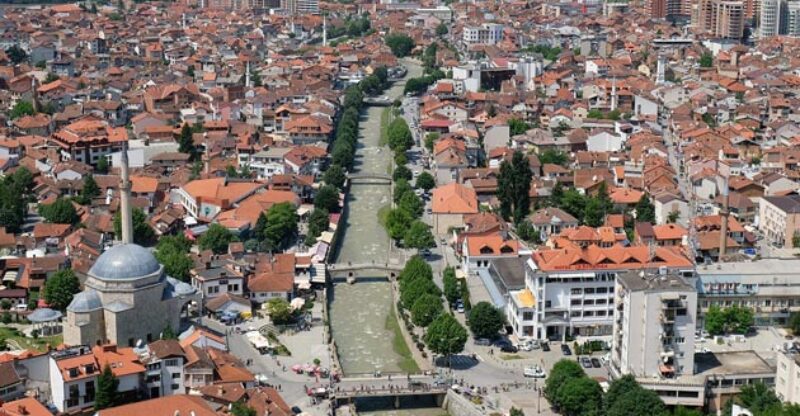 Prizren is a very nice city that you might want to see during your Balkan travel. Although Prizren is a small city, it is the second-largest city after Pristina, the capital city of Kosovo. You can explore this historic city in a day easily. So in this travel guide, I will tell you about things to do and places to visit in Prizren. 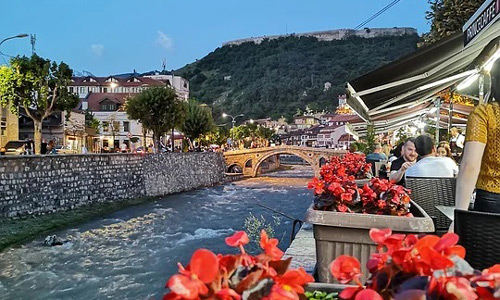 People call Prizren Turkish city in the Balkans. Because Ottoman ruled this nice city for a very long time. So many historical artifacts in this city date back to the Ottoman period.

Kosovo is the youngest European country. But it still meets the expectations of travelers with its historical and cultural heritage. In addition, there is a peaceful atmosphere in the city with a nice view of the Sharr Mountains.

Prizren is very affordable. Foods, accommodation, transportations are all cheap. Everything is very cheaper than in other countries in Europe. That’s another reason to love this city. So low-budget travelers like here.

So you should definitely visit here and stay for at least a night. Check Prizren hotels out by booking application.

Best Places to Visit in Prizren

Actually, there isn’t much to see in the city. But it is still very enjoyable to explore this historic city by walking.

If you are into ancient mosques, narrow cobblestone streets, and Ottoman houses, you will love here. Because Prizren is the cultural capital of Kosovo. Let’s start with tourist spots you should see in this wonderful city.

The mosque was built by the Bosnian Governor Sinan Pasha of the Ottoman Empire in 1615. Sinan Pasha Mosque is one of the most beautiful examples of Ottoman architecture.

The mosque is shown as the symbol of the city. It was used as a warehouse during World War II. It was reopened for worship in 1993. 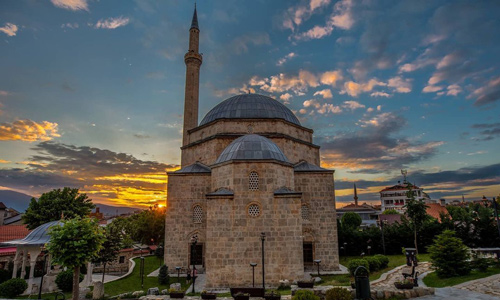 Sinan Pasha Mosque – Things to do in Prizren

Stone Bridge one of the oldest structures in the city. This bridge connects both sides of the Bistriça River. I think you will like the view of the bridge and river.

Although the date of construction of the bridge is unknown, historians estimate it was built in the 15th century. However, Stone Bridge was destroyed because of a flood disaster in 1979. In 1982, it was rebuilt in accordance with the original. 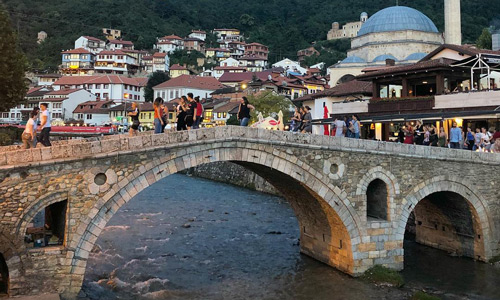 Shadervan Square is defined as the place where the heart of the city beats. Therefore, this is the most active tourist spot in the city. It is also the meeting point of local people.

There are many cafes and restaurants around Shadervan Square. In addition, shops and souvenir shops where you can shop are also located in this region. 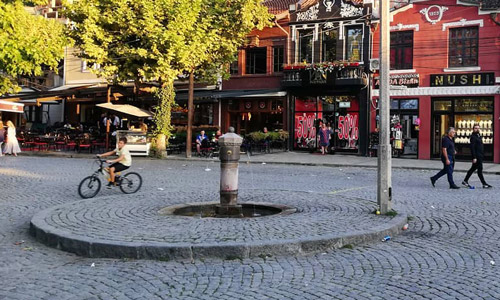 Prizren Castle is one of the tourist attractions you should see while touring Kosovo. The history of the castle dates back to the ancient Roman period.

This historical castle was very important during the Byzantine Empire and the Serbia period. Also, The Ottoman Empire used this castle to defend the city. So it has rich cultural value. 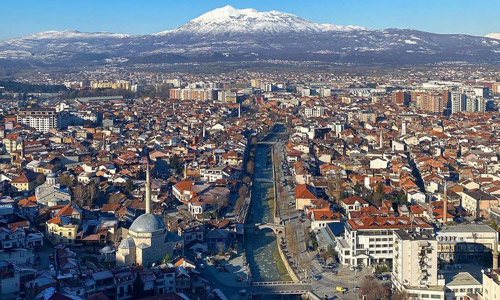 The castle offers a beautiful view of the city to its visitors. You can take a rest while watching the city view. Because if you come on foot, you can get a little tired. If you have time, you can witness a beautiful view especially if you come here during sunset. So this castle must be on the list of the most beautiful places to visit in Prizren.

5- Church of the Holy Saviour

One of the tourist spots that should be in this Prizren travel guide article is the Church of the Holy Saviour. This religious building, which is the Serbian Orthodox Church, was built in the 1300s.

It was badly damaged during the uprising in 2004. It has not been opened for worship yet.

The church is located on the way to the castle. You can also watch a beautiful view of the city from the church. 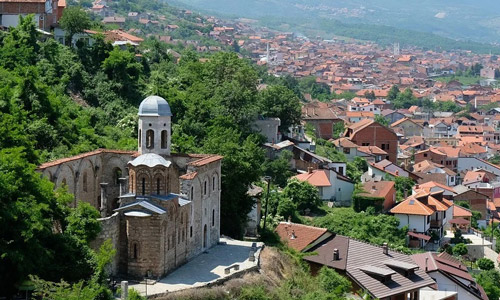 Church of the Holy Savior – Travel to the Balkans

Mehmet Pasha Hamam, one of the historical Ottoman structures in the Balkans, was built in the 16th century. The bath, which was used by both Kosovar women and men in the past, is now hosting its visitors as an exhibition gallery.

Mehmet Pasha Hamam was designed like a complex together with the mosque and the madrasa. It has nice architecture. 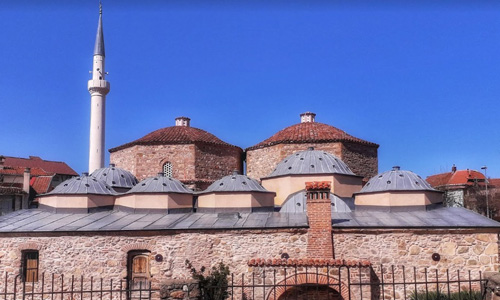 Although the building called Halveti’s Tekke was built in 1835, the Halveti Sect was founded by ‘Osman Baba’ in the 16th century. The building reflects the Ottoman period in the best way today.

It consists of some sections such as a tomb, sitting, and waiting rooms. In addition, the graves of  ‘Osman Baba’ and some members of the Halveti Sect are also located here.

Namazgah is so close to the bus terminal. It was built by Fatih Sultan Mehmed in 1455. You can also hear it as Broken Mosque. It must be on your route of places to visit in Prizren. 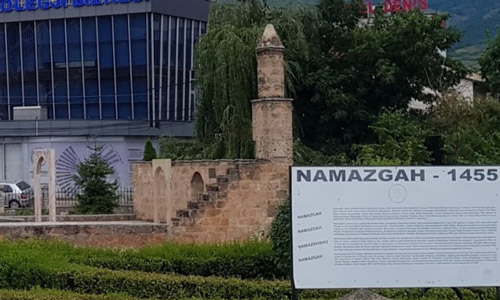 Cuma Mosque was first opened as a church by the Kingdom of Serbia. However, this Orthodox church, known as ‘Our Lady of Ljeviš’ (Bogoroditsa Leviška) was converted into a mosque after the Ottoman conquered the city in 1455.

The last tourist spot I want to explain in the Prizren travel guide article is Arasta Mosque. In fact, only the minaret of the mosque is standing today.

The mosque, which was built in the 16th century, was demolished by the decision of the government in the 1960s. The minaret could not be demolished, because there were protests about that. Its appearance is very interesting today. 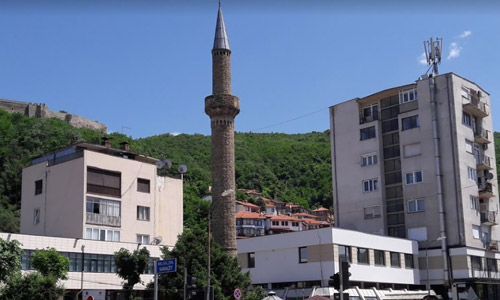 How to Get to Places to Visit in Prizren?

Let’s start with the question of ‘where is Kosovo’ first. Kosovo, one of the visa-free Balkan countries, has borders with Macedonia, Serbia, Albania, and Montenegro.

Where is Prizren? It is located in the south of the country. This city is close to the border with Albania and Macedonia. It is 85 kilometers away from Pristina, the capital of Kosovo.

If you fly, you need to land at Pristina International Airport first. After landing at the airport, you can take a taxi or go to Pristina first and then take a bus from there.

If you are in the neighboring countries or doing a Balkan tour, you can reach here very easily. You can find bus tickets here from most cities. For that, I suggest you use these travel applications called rome2rio or balkanviator.

By the way, remember this note. If you want to go to Serbia from Kosovo, you cannot. Because Serbia does not allow people to enter Serbia from Kosovo yet. But the weird thing is that you can go to Kosovo From Serbia.

Check the List of Beautiful Places to Visit in Serbia!

Now it is time to talk about accommodation in Prizren. Although the city is small, it is possible to find facilities for every budget in terms of accommodation.

The location of the hotel is not that important, because everywhere in the city is within walking distance. But it is better if you stay near Shadervan Square. You can choose those places to stay:

What to eat during your travel or trip to Prizren? First of all, let me say that the prices are very cheap. Especially it is so cheap compared to other European countries. So that is one of the nice things about the food here.

The meals here satisfy people both visually and in taste. Although Kosovo cuisine is a mixture of Albanian and Serbian food cultures, it is possible to find some taste of Turkish cuisine. 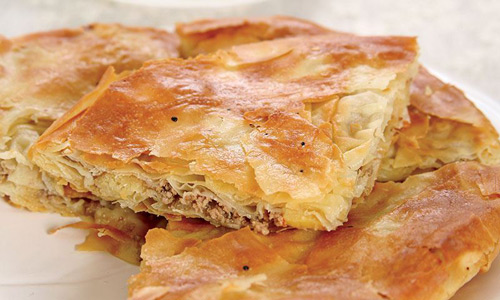 Albanian Byrek – What to eat – Places to visit in Prizren

They make foods such as meatballs, kebab, pljeskavica, and bureg with their own recipes. So you should go to any restaurant for lunch or dinner and definitely try these foods.

Restaurants are generally located around Shadervan Square. You can also drink tea and coffee in the cafes in this region, as well as try desserts such as trileçe.

Finally, if you are planning to make visa-free travel in the Balkans, I recommend you to read my articles below. 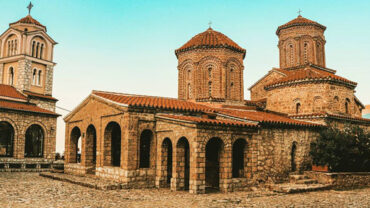